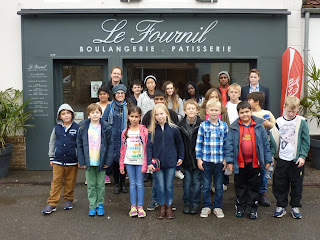 Students from Years 4 to 9, along with Mr. Johnson, Miss Carles-Navarro and Mrs. McNulty had a 'fantastique' day out just before the October half-term.

We began at 5am with a coach journey from school to the Port of Dover, although the time flew by. We were through security and on the ferry by 8.30, just in time to get some breakfast and to look at the White Cliffs of Dover as they became ever-more distant.

After the channel crossing, our first stop was at a bakery in the small village of Wierre-Effroy. Here, we were entertained for an hour-and-a-half making croissants and rustic bread, before sampling some of the delicious pains au chocolat, too.

The food-themed day continued with a wonderful meal of 'steak haché et frites', followed by 'mousse au chocolat' at 'Restaurant Hamiot' in Boulogne.

After that, we had time to explore. We walked all around the old town, visiting its basilica, town hall and passing some of the little shops. There was also a very French display featuring a giant snail!

For most people, the highlight of the day was the 'Becasuc' sweet factory, where we saw a variety of confectionary such as jellies and boiled sweets being made.

There was just time for everybody to buy some samples in the shop there before we began the long journey home.

We all had a great day out. On the lower senior school corridor, you can see a display with some of the best photos, as well as what the people who attended had to say about it.

Let's hope that we can do it again next year, to a different destination, and with an even larger group of people!